My Turn: Finding hope and new life after addiction 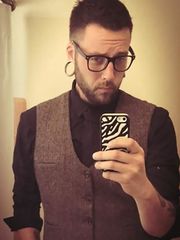 I grew up in a very rural village in Michigan set back in the woods next to the water. I always felt “different,” for lack of a better term. I always wanted to watch MTV instead of “Sesame Street.”

I was a chubby kid, too smart for my own good. I skipped two grades because of my reading and math abilities, which furthered my isolation. My parents also divorced early on. My mom said she was going to go get a haircut at my grandma’s house. I found that strange even as a child because she had a couple of bags packed with her.

I picked up my first drink voluntarily at age 13.

I started to figure out where I fit in. It wasn’t long before school took a back seat to my new-found interests.

I was wrapped up in smoking weed and chasing girls around and playing bass guitar. This change didn’t go unnoticed, and my dad tried time and time again to take disciplinary action. That didn’t go over too well, and after several very angry hours between us, it was decided I would go live with my mom about 30 miles away, which may as well have been the other side of the world.

I found a band to jam with, and I felt like everything was going to be OK after all. I started to live out the rock-star fantasy I had in my head for years. I was introduced to another local band through the drummer of mine. They were all about five-10 years older than me and had a house together. They had all of the trimmings one would expect of 20-somethings in a metal band: the pot, the booze, the girls. I felt like I had made it to where I was supposed to be.

Moving up to cocaine

One day, a friend offered me cocaine. Up until then it was something I was only vaguely familiar with. I had seen it in movies or heard about it in songs. So, there it was … along with a healthy dose of peer pressure. As soon as I snorted that line I knew: It was all so different. I felt like God the rest of the couple of days it took me to sniff the bag he gave me up. I knew that I wanted to feel like that forever.

I graduated from an alternative high school, got a decent job at a stamping factory and moved in with my best friend, Ant. We had the spot for everyone to come party at. We were drinking heavy and experimenting with drugs more. Coke was my favorite by far.

Eventually, a MySpace relationship brought me to Phoenix. Almost as soon as I got to Arizona I was getting loaded. I drank every day and found coke as much as possible. I was continually using drugs and drinking. I was a “high-functioning addict” … whatever that means. The entire time I was a complete wreck inside, regardless of outward appearances. The real bad times started two years ago when I got into heroin and meth. It opened a whole new world of hell for me. I lost everything I had worked for.

All of my relationships suffered.

I lost jobs, housing and cars. My family didn’t know most of the gory details, but I assume most everyone within arm’s reach suspected something.

Most things in life were fleeting at best. I was flirting with suicide on a daily basis. I couldn’t stand the person I had become. I was driving my personal finances into the ground to support my habits. I couldn’t handle the inner madness anymore after the chemical crutch I leaned on so hard for so long had betrayed me. I had been a frequent visitor of the ER with insane bouts of anxiety and heart palpitations. I was homeless and exhausted. It was July 2016.

I had surrendered after months of trying to go it alone and get sober through meetings and AA sponsorship.

I thought by simply walking away from the bottle and the bag I would be fine and everything would repair itself. Unfortunately, as they say, “half measures availed us nothing.”

I thought I could play with fire, so long as I turned the heat down. Loss became the only constant in my life. Pain and wreckage were never too far behind any bad decision I made.

There were sporadic mornings waking up in a panic in unfamiliar surroundings trying to grasp at straws to figure out a solution to the hundreds of questions racing through my mind, finding in my pocket a plastic baggie or pipe that I swore I would never buy again. I needed help or I needed to die. I couldn’t live like this anymore. Twenty-nine years old and coming to a junkie rock-star end. I guess I would prove Dad right all along.

I started looking into treatment centers, as I knew that was my last hope. All I had to my name was state insurance to get in.

I made a lot of calls and sent a lot of emails using the Tempe Library as my base of operations. A big misconception that many people have is that rehabs are all over and waiting with open arms. I searched frantically for almost two weeks to no avail. Finally, July 15, I received an email from Crossroads corporate office, explaining their intake guidelines. It sounded like they would accept me and it would be a good fit. My last obstacle was finding housing for my dog. As soon as I did that, I was off to do my intake.

The morning of July 22, I went down to the Crossroads office and was greeted by a line of 22 men and six women. As soon as we were all in the waiting area a man came out from the back and explained that there were a total of six beds open that day for men, and three for women.

I was devastated. After everything, what little hope I managed to scrape together was quickly falling apart. I watched as all the guys ahead of me were called back and given beds or turned away. I managed to make it back and was told that there was one spot left. Somehow I managed to get the last spot that day, and I knew that there was something more working in this universe. There was no way in the world that I could have manipulated my way into that spot that day. I could have passed out and run a marathon simultaneously at that moment.

They loaded me up with some lunch, a bus pass and a printed map with how to get to the facility I was assigned to: Crossroads Midtown for Men.

I remember it being roughly 137 degrees that day, dragging my bag of clothes and my guitar down the street. I came to the facility exhausted, relieved and hopeful.
A warm welcome

I met with the program coordinator; John House, and his assistant. They set me up with a bed and a box of hygiene supplies and showed me around the facility.

I felt safe almost instantly. The warmth of the welcome was something that I needed more than anything. I hadn’t been able to relax in months.

I met a fair number of the guys that day, got some food in me and slept like the dead. The only worry I held onto was that of how my dog was. After all, she had been the only real friend I had for the past several years.

Throughout the next two months I was given more information than I knew what to do with.

I learned that this facility ultimately had very little to do with substance abuse. I started to learn through a combination of SMART Recovery, the 12-Step Alcoholics Anonymous Program, peer support and some extra-curricular course work all the reasons that I had been reaching outward to remedy my spiritual maladies for these years.

We often equate addiction to the heroin addict under the bridge or the man who drinks himself hopelessly into loss, but there is so much more to it. The tools and coping strategies I have been able to put into place in my life have truly saved me. I wouldn’t be here typing this today if not for coming here those months ago.

Through prayer, meditation, gratitude and altruism I have been able to change my life.

I have had the opportunity to work with others and work for the same facility that helped me.

Today my life is different. Things aren’t all unicorns and pots o’ gold at the end of fuzzy rainbows. Life is still life, but I have learned the difference is ME.

My perception is reality. I don’t need to rely on outside entities for my happiness. So long as I remain grateful and I am proactive in my approach, I am able to see that I can conquer whatever obstacle life hands me without the chemicals.

I wholeheartedly believe that a majority of the population could receive therapeutic benefits from a program like SMART Recovery. Self-medicators don’t have the market cornered on sadness or confusion.

Life is a strange journey, and we have all been hurt by the cold at one point or another. There is hope. Anyone who is suffering, you do not have to live like that ever again.

Anybody who might read this, I want you to know that I love you and that there is help. Never hesitate to reach out and take the action that can heal your wounds.

Changing lives, one person at a time.

Crossroads is committed to delivering high quality, comprehensive, empathic, hopeful, effective, and affordable services tailored to the needs of those we serve and our community.